Ok,,,we can go ahead and begin.  As usual in these seminars, I will give a short talk, to introduce the topic and hopefully stir up some discussion.  When I finish, we will have plenty of time for questions and comments, so please hold them until I finish. (picks up his notes)

I think that this second of our two sessions on the Slave Girl books is the perfect time to present a concept that I think often is missed by the readers of the Gorean novels.  Especially by those disturbed by certain aspects of the Master/slave dynamic that is so much a part of them, and even usually a bigger part of the Second Life role play world.  When taken alone, and not in the whole context of the series, these ideas were very radical and also impossible to defend against the critics of Gor.  Also, sadly, they were accepted blindly by many readers as representing either the philosophical ideas of the author or adapted by people claiming to adhere to Gorean philosophical ideas outside of role play.  I think that if Gor had been created as a role play game on the internet in the first place, this would have never become that much of an issue, but such was never its intent.

So, in discussions and chat room debates, never envisioned in the author’s wildest dreams as he wrote them in a pre-internet world, people have tried to defend these false and inaccurate statements trying to justify or explain their feelings with the aid of the novels.  Many people are aware of John Norman’s book, “Imaginative Sex”, in which he suggested that the relationship between a couple could be enhanced by role play scenarios that added zest and titillation to their sexual activity.  Being the slave of a strong man from another planet was only one of many such scenarios.  It was, however, the one that he chose to base a whole series of novels on and the one that with the advent of the internet, grew into Online Gor.

Last night, I came across a girl that I have known in the past that was exploring the Gorean world, and did not have a very smooth experience in it as a Gorean slave girl, on her profile, she had written: “Do not attempt to give me any direction based on Sci-Fi books.”  I have spoken in previous sessions on the idea that the Gor Novels were not really classified as Science Fiction, but more in the genre known as “Fantasy.”  This is more compatible with the idea of the Master/slave on another planet sexual fantasy of “Imaginative Sex.”

All through the novels, Tarl Cabot, refers back to his old planet of Earth in very critical ways.  He speaks often of how people on Earth are like sheep being led by slogans and platitudes and half truths that pervert truth and allow people an easy way out because they can just foolishly follow and not question.

“I envy sometimes the simplicities of those of Earth, and those of Gor, who, creatures of their conditioning, are untroubled by such matters, but I would not be as either of them.  If either should be correct, it is for them no more than a lucky coincidence. They would have fallen into the truth.”  Page 7  Marauders of Gor

This quote, and others like it, are the warning labels of the Gorean novels.  You notice that Tarl is saying clearly in that quote that he envies the simplicity of the Goreans as well, and would not be like them either.  But, critics of Gor ignore these warning labels and attack such generalizations as:  “Goreans say all women are slaves.”  or  “Gorean say that there are two kinds of females, slaves and slaves.  For years, lovers of the Gor novels have tried to defend such inaccurate statements and ignore the truths that Online Gor, and, indeed, the study of human nature, have so clearly pointed out to us.  Whenever, I believe, that Tarl says,,,,”Goreans say” he is throwing out the “simplicities of their conditioning” having been born and raised in a society that uses such things in the same way Earth uses slogans and conditioning to subvert truth.

The four slave girl novels follow a simple pattern.  They are romantic love stories set against the back drop of a world that is as cruel and barbaric and in many ways misguided as Earth itself.  The basic truths that we might get from reading them, and that seem to be supported by the popularity of kajira role play in online Gor, as well as by many other scientific disciplines, is that many females are genetically wired to respond to strong and honorable men, and being in their presence causes strange feelings of submission.  These feelings of submission, perhaps, the result of millions of years of evolution when females depended on strong men for protection and attracting them was their own means of survival, have not been, and can not be, erased in a couple of generations of technological explosion.

When we forget the “Goreans say ALL” simplicity that the author warns us about again and again, we have a much stronger defense of Gor.  Ever since, the Gorean novels were introduced, the fantasy in them has touched many females.  They have identified with these four girls to one degree or another, from the few girls who get into it deeply in a alternative lifestyle in real life, to the thousands of females that simply enjoy role playing them and their adventures while keeping their real life separate and trying to convince us they spend hours and hours role playing slave girls without a single twinge of connection between the role and real life feelings.  And how much easier is our job in defending Gor, when we are not the ones dealing in absolutes.  When we try to make the claim that….”in every single female there is a slave girl waiting to come out”, we look as stupid as the critics of Gor, who say…”there is really no such thing as a submissive female, and anyone who takes this stuff seriously is sick in the head.” The Gorean novels try to teach us this lesson. 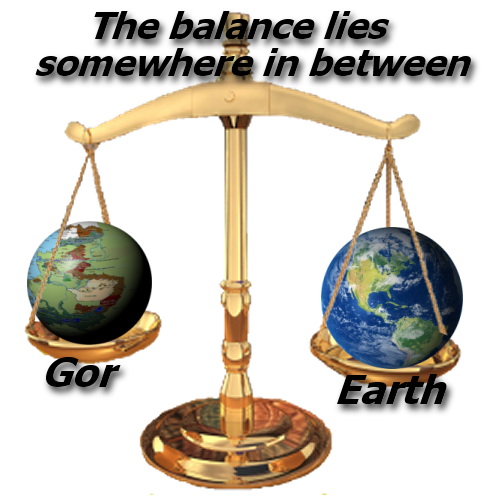 Truth is not found on the extremes, but rather in the middle somewhere. We can learn to role play this Gorean extreme for fun, but if we want to discuss it seriously, we need to do like Tarl says in the quote, and be like neither of them.  Not all Gorean, and certainly not all wimpy politically correct unthinking Earthmen, because if either of them are right, it is only a lucky accident.  The four slaves girl books show us a fairy tale that we could wish for all females.  Stripped of the world where it takes place, the story tells us that if a girl is strong, brave, unafraid of risk, and able to bounce back from disappointment, perhaps, she might find her true soul mate.  Perhaps, when Men do learn to behave like men, females are drawn to them at an almost genetic level?

When we read them, and study them, and discuss them, these are the things we should be speaking about, the universal truths in them unsullied by the extremes of fictional Gor or the social conditioning of modern Earth. To get the most of these four books, we must get past the surface into the deeper issues.  They are not sacred scrolls as some have spoken of them in the past, nor are they immature sexual fantasy by a rejected suitor.  The experience of online Gor, the large numbers of girls who have been touched by them to the point they would identify as “slaves” in real life, let alone the larger numbers of girls that role play it, point to the fact that something is there.  Something beside sci fi.  That “something” is where serious students of these books should be looking and even what our role play should be exploring. (puts down is notes)