As usual for this seminar, I will give a short opening talk to introduce our topic, and then will open the floor for questions and comments.  So, if you will hold the all until I finish, I will make sure everyone has a chance to speak.  Smiles and reaches for his notes.

Today in the third session of this ten session seminar, we will begin our discussion of a four book group of the classical Gorean novels.  This group is without a doubt extremely popular with female readers, and they are often the first books read, and sometimes the only books read by them.  I call them “The Slave Books” and they differ from the other 21 novels in that the narrator is a female.  The four books are as follows with the publishing dates:

I put the last group of books into Second Life Gor terms to give a brief summary of the plots, so will do so again with these four books.  Put in the most simple SL terms, four girls hanging out in Earth sims, suddenly find themselves kidnapped and bought to Gor.   They go through various adventures, hang out at the Gor Hub, experiment with different cities, attend a school, and then begin to interact with Gorean Masters.   They get lied to, played, ignored, and even abandoned, before finally ending up with a great Gorean Master, who takes them off to his private Homestead Sim where they live happily ever after.   And that is pretty much the plots in a nutshell. 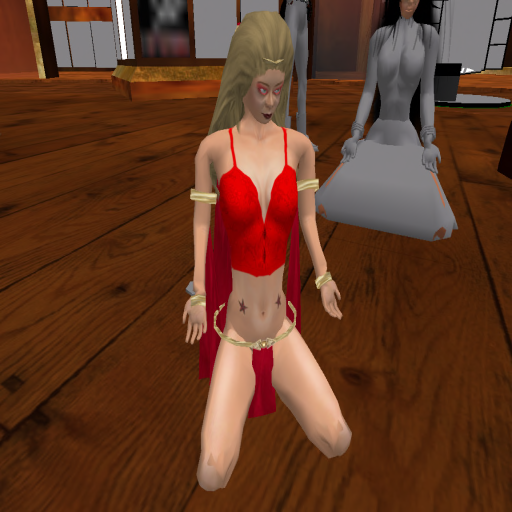 When we talked about the early Tarl Cabot novels, we discussed the idea of progression from fantasy to reality; from a less serious ambiance to a much more serious one.   The Slave books do this even more so.   I have sometimes referred to them as steps in the understanding of Gorean slavery almost like the same math analogy we used with Tarl’s story.

Captive of Gor is arithmetic, Slave Girl is math, Kajira is Algebra, and Dancer is Advanced Calculus in that analogy.   Of course, if this is true, then the same problems exist for rp as with the Tarl books. Which level of Gorean slavery are you rp’ing?   The attitudes and behaviors and expectations of a Captive reader would differ muchly from a Dancer reader, if they were using those novels alone as the basis of their rp.   Just to illustrate this idea even more, lets look at the girls themselves.  Here is a quick look at the four girls and their backgrounds.

Elinor Brinton:  wealthy, beautiful, enjoying all the privileges of her sex and social position

Judy Thornton: an excellent student at an elite girl’s college

Although all the girls are described as attractive,  you can see how there is a change from an almost fantasy women to a more average women as the books go along.   Elinor Brinton, of Captive of Gor, is a fantasy character that women can not easily identify with, but would make the kind of avatar and back story that many new girls would choose.   It is unlikely, that many girls in SL Gor, being realistic, would be wealthy, beautiful women enjoying all the privileges of her sex and position.   I am sure there are some who are college students, even more that work in Walmarts, or other department stores or even more normal professions such as nursing and teaching.

Here is what Tiffany has to say in Kajira of Gor, upon meeting her first Gorean man, in her department store on Earth:
“It was very strange.”
“I have never met a man of this sort before. Surely I had met many boys, and men, but this was the first time I had ever been so acutely aware of the difference, this special sort of difference, between women and men, or between women, and certain sorts of men…”
“He was different from the men with whom I was familiar.”
“He looked down upon me, and I felt very female before him. Perhaps that was what was so strange, my sudden disturbing sense of the radical difference between us, my sudden, alarming understanding of the momentous physical , psychological, and emotional dichotomy dividing us, dividing the sexes.”
“We are so different from them!”
“Can these radical disparities be truly meaningless?”
“And if they are not meaningless, what might they mean?”
“He was at ease with his sex, and his strength, and power.  There seemed a primitive, barbaric, unassuming lupine naturalness in him.  How uneasy I was.”
“Had he not been properly enculturated?”
“It seemed he had not been suitably socialized, reduced, crippled, tamed.  What right had he to exist in my culture?”  “I wondered if once, long ago, men had been such as he.”  Page 11 Kajira of Gor 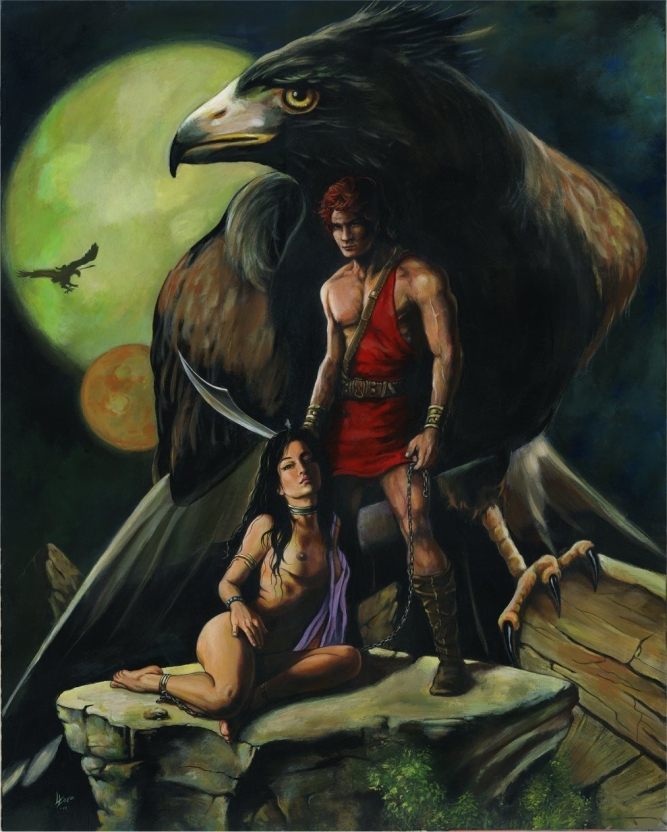 I am sorry, but this does not seem to be really concerned with demeaning women as much as demeaning the men of Earth, a much more constant theme in these novels and in all the Gor books.   Of Course, there is much about reducing women to property and beasts with no legal rights, but this is all done to create a paradigm totally different than Earth’s, a counter Earth view.   The Goreans had assholes, and jerks, and brutes, and bullies, and they did not really have to learn to deal with women for the most part, they simply enslaved them.

But, sorry, peeps, the message of the Gor novels, and of these four in particular, is not that this is a better way to deal with females/male relationships, but rather that certain truths exist and they apply to Earth where men are weak, and females tend to dominate most relationships, just the same as they apply to a barbaric world where men enslave women.   These Slave novels are not intended to be realistic stories.  They are modern fairy tales, where the girls show amazing flexibility and adaptability, overcoming increasingly hard and often unpleasant situations to eventually find their place at the side of a Man that embodies the qualities of maleness suitably strong to match their own female strengths.   The word “love” figures prominently in the final page of all of them.   All of them end with “lived happily ever after” endings. 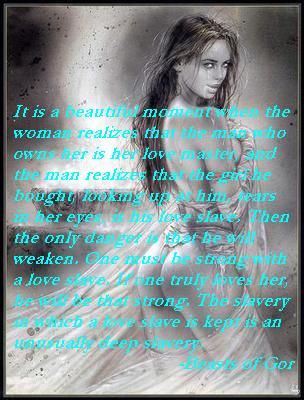 In book after book, the girls are the real heroes.   They are pulled out of their comfort zones, thrown into desperate situations, and somehow they fight through it to find their true loves and end up cuddled up at their feet.  Fairy Tales.  And yet, the women of online Gor have, over the years, told me of their real life stories, full of cheating men, liars, and abusers, and men who act like little boys, and fail again and again to act with basic honor.   Many of the girls who have been in online Gor for some time have similar stories here, of deceit, and abandonment.   They struggle to find their place in a strange society and yet, like the girls in the novels, they never give up the search for that “right Man.”   So, are the books really demeaning to women?  Or are they actually demeaning to men.   The idea that if men would ever finally act like men, girls do not need months of classes to learn how to act like females, is a theme repeated again and again in these novels.   Many might view these four books as demeaning to women, but when you finally come to understand the message of them, they are much more demeaning to men.  And like all the Gor novels, are really a call to Men, to man up, and then , you might be surprised at what you might find at your side, or for some, even at their feet.

Next week, we will continue on this discussion of the Slave novels.  Puts down his notes.