I was thinking a lot about the history of Second Life Gor lately. I have always been a bit of a historian and so I think that we can learn a lot by looking back and seeing where we came from and how we got to where we are now.

Online Gor started at about the same time that people discovered there was an internet, and it was connecting them with people. Very early, some fans of a certain Science Fiction/Fantasy series went online to discover if there were other fans. And they discovered that there were a lot of them and they had been touched by the books in some way, and they wanted to ‘chat” about it.

In other parts of the internet when “chat rooms” were becoming popular, people remarked how much the chat room experience was like the “tavern or pub or local bar” experience. You dropped in and saw old friends, and sometimes made new ones, and even had a chance to pick up chicks, and take them to ‘private rooms.”

This led some of them to style their chatrooms as taverns. Some of the girls would pretend to be busty serving wenches giving the tavern a bit of old style flair.

It was not very long before the fans of the Gorean novels were picking up on this trend, and the “Online Gorean tavern” was born.

There followed a long period of time known as “chatroom Gor.” In last night’s Wednesday night discussion from Glorious At on GPR, there was a lively talk about “onlineisms.” Almost all of them had their birth in the chatroom days, and they were usually created to mesh the fictional world of Gor with the demands and limitations of internet communication. Much of the cultural that marked online Gor flowed from this attempt at meshing. Elaborate greetings, long descriptive “serves” and a host of other tweaks began as attempts to make the chatroom experience, devoid of anything visual and consisting only of words on a monitor, come to life and be fun.

Mirc, AOL Gor, Yahoo Gor, and a host of other venues flourished during this period. I think that almost every person that is still around from that period thinks of the “back in the day” chatroom Gor experience as the Golden Age of online Gor and feels its has declined into the current chaotic state of Second Life Gor. They speak of the structure, discipline, and seriousness of it fondly.

After a couple of abortive attempts to make Gor come to life in a visual and graphic manner, technology made a giant leap forward in computer animation, and Second Life was born.

It was not long before some of these structured and disciplined and serious online Goreans came to hang out in second life. The very first “Gorean” sim was actually a private place where one of these fellows would invite his friends over to play around with a sort of “animated” chatroom idea.

I was not there at the time, but the stories tell of how the very early days were a frenzy of discovery. Most of the building and scripting things we take for granted in Second Life today were being created by the early people. I don’t think a lot of people realize that the whole grid was just a blank platform. The Lindens provided the platform, but not the content. These were exciting times for people with a creative bent as they learned the magic of the “prim” and what could be done with it.

And one day, one of these people, who happened to be a fan of the Gorean novels, and knew about the chatrooms, and was on the cutting edge of sim design and scripting at the time, got the idea to see how it would look to build a whole Gorean city. He had just designed a “underwater” world that apparently was super cool, and thought he would tackle trying to visualize how one of John Norman’s cities would look. He chose Port Kar.

It would be something if we could find some screen shots of this first build. People who remember it say it was really special, but I am sure they were also very easily impressed. After all, there was nothing to compare with it. For years, online Goreans had to make do with words, and now suddenly, with a click of their mouse, they were standing on the dock of Port Kar, the scourge of Thassa. 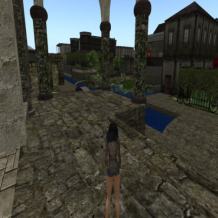 It was heady stuff. And it was suddenly one of the most popular sims on the entire Second Life Grid. The idea of ‘traffic” was just beginning, and within a couple of weeks, the Gorean city of Port Kar jumped into the top spot. I was told that some of the “Linden accounts” used to hide in the woods outside the city to try to figure out what was going on.

But, one month later, the city was torn down, and the sim closed. And the reasons for its failure would resonate down through the years, and cause sim after sim to rise up, have a brief moment of glory, and then close.

Second Life Gor had a foothold though. In the month of its existence, Port Kar has spawned a couple of other Gorean sims, and the people displaced by the destruction of that sim, just moved over to the newer ones, and many of them dreamed their own dreams, and as soon as they were able, purchased their own land, and began building their own cities and towns.

It just happened. It wasn’t planned and it wasn’t very well thought out. And I think it caused a big culture disruption, because the graphics and the animations were reminding people of another world that was growing very quickly. The world of gaming. The gaming potential of Second Life was pretty evident. In the first month of Port Kar, for example, a rudimentary “meter” was created to stimulate combat. it was described to me as much like the old “Rock em Sock em Robots, that just stood their pounding on one another until a winner was decided. 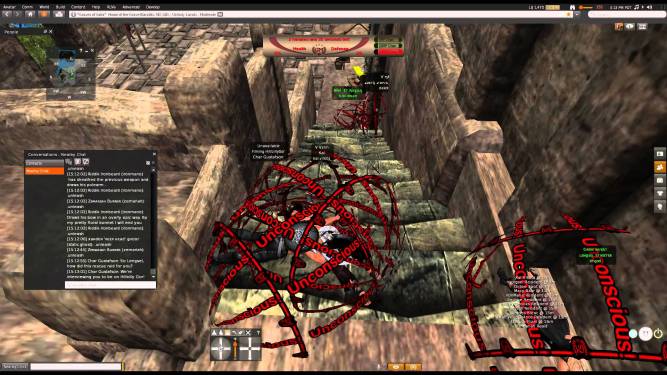 All of these elements came together at once in a chaotic mixture. Another group joining into the fray were the dedicated story line role players. The free form of Second Life, and the lack of gaming restrictions and rules, which was the very thing bothering the gamers, appealed to this group. They could create their own stories. it was a form of fan fiction. Not only would they be living inside the Gorean novels, they would be writing new ones. Fan Fiction.

Many of the most philosophical minded of these early Goreans took one look at what was happening and retreated back to the chatrooms. One by one, they grew disgusted by the lack of order and discipline. They rebelled against being lumped in with people who were jumping in and out of character like chameleons, and they rebelled against animations replacing the beautiful and poetic textual posts on which their Gorean experience had been forged.

But, a few stayed on doggedly to try to keep the vision growing. In one of the seminars last year, I took a moment to praise the success. Hours and Hours of fun and interesting times, life changing meetings and in some cases, real life changes that were positive and rewarding. Two of the girls living in my real life Household met me as avatars the first time they met me. It would seem a bit strange if I called Second Life Gor a failure.

Yet, I do not think it has lived up to its potential, and that bothers me a lot. We were handed something very unique and if we had approached it with a coherent vision and with the high standards that one would expect of Goreans, we could have done so much better.

The thing that the chatrooms did right from the start was accept the reality of the internet. They changed and adapted their vision of Gor to the opportunities and the limitations, rather than try to force an unrealistic idea that they could consistently pretend they were really on a fictional planet.

This came home to me as we sat around a dance ring last night, listening to Goreans Portal Radio, as the broadcaster was reading the posted comments discussing onlineisms, and why they were so “wrong.” We shouldn’t have turned onlineism into a dirty word. We are online, and when we recognize that, things work better.

I spoke of the three world idea. There is the real world, and we all live there. It has to come first. In all the years that I have attended and led discussions here in Second Life Gor, I have never heard even the most mentally deranged people argue that this isn’t so, or shouldn’t be so.

There is the fictional world of Gor created in the novels of John Norman. None of live there, and none of us ever can. It is not real.

And then there is Second Life Gor. it isn’t real either, we are told, but we can see it. hear it. move around in it, and it can have a real impact on us. It can be life changing.

We aren’t locked into our history. Right now, there are people trying innovations to do it a bit differently. After many failed attempts to build a center for education, the Gorean Campus has figured out a pretty successful formula, and continues to try out new ideas.

One of my friends has recreated the Sardar Fair sim with an idea of making it to the Second Life community what the Sardar Fairs were to the fictional Goreans.

I contend that the old days were not the Golden Age of Online Gor. We are about to enter it, and we are going to be the ones to lead the community into it.

As Tarl says in the cave in Marauders of Gor:

“If the land is to be saved, it is by us, and others like us, that it must be saved. There are no spells, no gods, no heroes to save us. It is not Torvald that must awaken, it is you and I.”

All we have to do is figure out how to structure our world to best fit the culture of a fictional world into the practical reality of the internet. We have all seen it done wrong many, many times, and we have also glimpsed it being done right from time to time.

Could we start again please? I think so. History is a teacher, it is not a set of chains. if online Gor is the big kids playground as we have claimed in this seminar, we should be at the point now where we can tell what has worked and what has been fucked up.

We made mistakes. There is no shame in that. But, if we keep making them over and over and expect something different, that is insane.