Gorean Compass – What distinguishes us from urts and sleens?

I often times struggle with maintaining balance in this world of Second Life Gor.   When I first came to the online world, and Gor existed in the words of a book, or the written words of a post in a chatroom, it was not as hard.

I am only human, and when the temptation to indulge in the sensual pleasures of the flesh and to sink down into the intellectual safety of the petty and the superficial beckons me, I have a couple of passages from the books that keep my Compass heading pointing uphill to higher ground.

“I sat in the darkness and wondered on honor, and courage.  If they were shams, I thought them most precious shams.  How else could we tell ourselves from the urts and sleen? What distinguishes us from such beasts?  The ability to multiply and subtract, to tell lies, to make knives?  No, I think particularly it is the sense of honor, and the will to hold one’s ground. 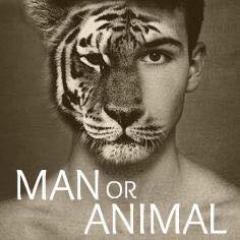 In previous classes, held in this seminar, we have spoken of the idea of a superior human being that maintains a balance between the “too soft” of Earth and the “too hard.” of Gor.  It is the basic division point, and has always been, between Role play and Lifestyle approaches and even reflects the debates over the true meaning of “BTB.”

And most importantly, it reflects the basic duality of man that is at the heart of the Gorean ethos. The symbolic battle that takes place in the first 18 or so books of the series between the Kur and the Priest-Kings is between our rational nature and our animal nature.  The rational side telling us to live each moment in such a way as to be able to live with it, without regret, for eternity, and the animal nature telling us to live each moment only considering our own lusts and desires.

The second quote takes this idea a step further.

“What is it to be a warrior?” she asked.
“It is to keep the codes, ” I said.  “you may think that to be a warrior is to be large, or strong, and to be skilled with weapons, to have a blade at your hip, to know the grasp of the spear, to wear the scarlett, to know the fitting of the iron helm upon ones’ countenance, but these things are not truly needful; they are not, truly, what makes one man a warrior and another not. Many men are strong, and large, and skilled with weapons. Any man might, if he dared, don the scarlet and gird himself with weapons.  Any man might place upon his brow the helm of iron.  But it is not the scarlett, not the steel, not the helm of iron that makes the warrior.”
She looked up at me.
“It is the codes, ” I said.

I don’t know, maybe it is just me, but I immediately think of Second Life Gor, when I read those two quotes.   I think of a place where for a small amount of money, one can dress himself in the most authentic of clothing, and use a few simple expressions, like “Tal” in place of “hello, and, if a man, arm himself with so many swords, spears, and bows, that he looks like a porcupine on steroids.

I think of amazingly talented builders who can create whole cities that make the books come to life before my very eyes.  The word, authentic, is often used.  It is a more forceful word than BTB.   And I watch role play stories unfold that suggest that in a short time, the Goreans would have become “woke” and realized the error of their ways, and would have began crafting their society to reflect the same false and unnatural ideas that were driving Earth society to chaos.

All of these thoughts are really good for me.  They remind me that the Gorean compass is pointing consistently to an azimuth that is leading to higher ground.

And one of those points is that it isn’t all that superficial and petty trivia that makes us authentic.

I know how “cool” our trivia is, and I know how John Norman seemed to have hit upon a fantasy that resonates with us on many levels.  People who hold beliefs that are totally contradictory to the underlying philosophical ideas of the books, still seem to love to come pretend here and indulge in the sensual, sometimes dark and forbidden, pleasures, or just groove around in the right clothes, saying the right things and serving drinks in the proper containers.

But, I can not do that myself without seeking that balance.  I know better.  I know it is not the color of the cloth that he wears that makes one man a warrior and another not.  I know it is the codes.  I know that we are not really above the urts and sleen because we can do math or tell lies, or make knives.  It is because of the higher things.  The spiritual things.

I know that I am not reflecting Gor when I focus myself outward and evade any attempts at self improvement by spending my time on how fucked up others are and how wrong they are doing everything.

I know I am not reflecting Gor when I lower my standards,  compromise my honor, betray my codes, or refuse to accept responsibility for my own actions, regardless of how authentic my clothing might be, or how effective my weapons system.

One of the most epiphany moments of my Gorean experience came when I finally understood a comment made by Bear of AR.  When I met him, he had two real life slave girls, one who lived with him, and one that came to visit one weekend a month.   He said. “It is not easy to be a Gorean.”  and I laughed at him.  No, I thought, it is not easy to have two females as your slaves.  “wow, how hard that must be.”

But, the epiphany moment came when I realized he was right.  it is hard.  You are held to a higher standard than most, and you keep raising the bar.   I realized it was a chicken and the egg questions, and I had it wrong.  He was not a Gorean man because he had two girls being his slaves, he had two slaves because he was a Gorean man.

Balance is easy here in Second Life Gor, and I will have no trouble maintaining.  This campus offers classes and discussions every day.  All over SL Gor, there are discussions, seminars like this, libraries filled with informational notecards.    And the books are still there, like fields filled with hidden gems and clues that you might discover and savor if you just dig around in them a bit.

As I always say at the end of my radio show, “Its your world now, Goreans, Use well the time.”

I know that I am going to continue to ask questions, fight for truths, set high goals and maintain high personal standards of Honor and courage.  I am not going to be distracted from basic truths by trivia or pretty builds.  And then I am going to indulge myself in healthy, lusty, virile, and animal pleasures.   Balance is everything.